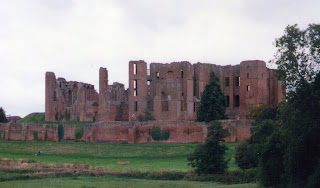 Kenilworth Castle, in Warwickshire, was founded in the 12th century by Henry I’s chamberlain, Geoffrey de Clinton, and the Norman keep dates from this time. During the civil war over the succession to the crown following Henry I’s death, his grandson, later Henry II, seized Kenilworth, and once he became king, he kept it as a royal castle. It was extended in the thirteenth century by King John who built an outer perimeter wall with towers at intervals. 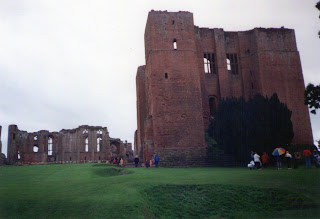 Henry III granted the castle to his son Edmund, who was created Earl of Lancaster, and thus in the fourteenth century, it came into the possession of John of Gaunt, who married the Lancastrian heiress. He rebuilt much of the Inner Court, and the castle became one of their main residences. When John's son usurped the throne in 1399 and became Henry IV, the castle reverted to royal possession again.

It was one of the Lancastrian strongholds during the Wars of the Roses, acting as a military balance to the Yorkist castle at Warwick, about eight miles away.

In Tudor times, Henry VIII granted the castle to John Dudley, Earl of Northumberland, who was executed in 1553 after his abortive attempt to put Lady Jane Grey on the throne. However, the castle was restored by Elizabeth I to Dudley’s son, Robert, Earl of Leicester. Robert was one of the Queen’s favourites, and at one time it was rumoured they might marry (especially after the mysterious death of Dudley’s wife, Amy Robsart). He embarked on a programme of rebuilding and modernisation, and the Queen was his guest at Kenilworth on two occasions in the 1560’s.


The most famous visit was in 1575 when the Queen brought 31 barons and 400 staff for a royal visit that lasted 19 days, an exceptionally long visit. Dudley entertained the Queen with pageants, fireworks, entertainment, hunting, and lavish banquets. The cost of all this almost bankrupted him – but in the end the Queen decided not to marry him!


On one of our visits to Kenilworth, a medieval event was taking place, with plenty of sword fights, which were fun to watch! 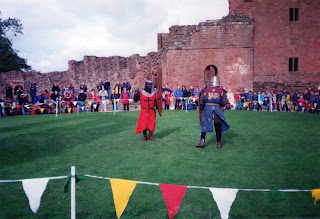