I’m continuing to feature some of the places that appear in my soon to be published new novel ‘Irish Inheritance’ –and today we're in Dalkey with Jenna and Guy. 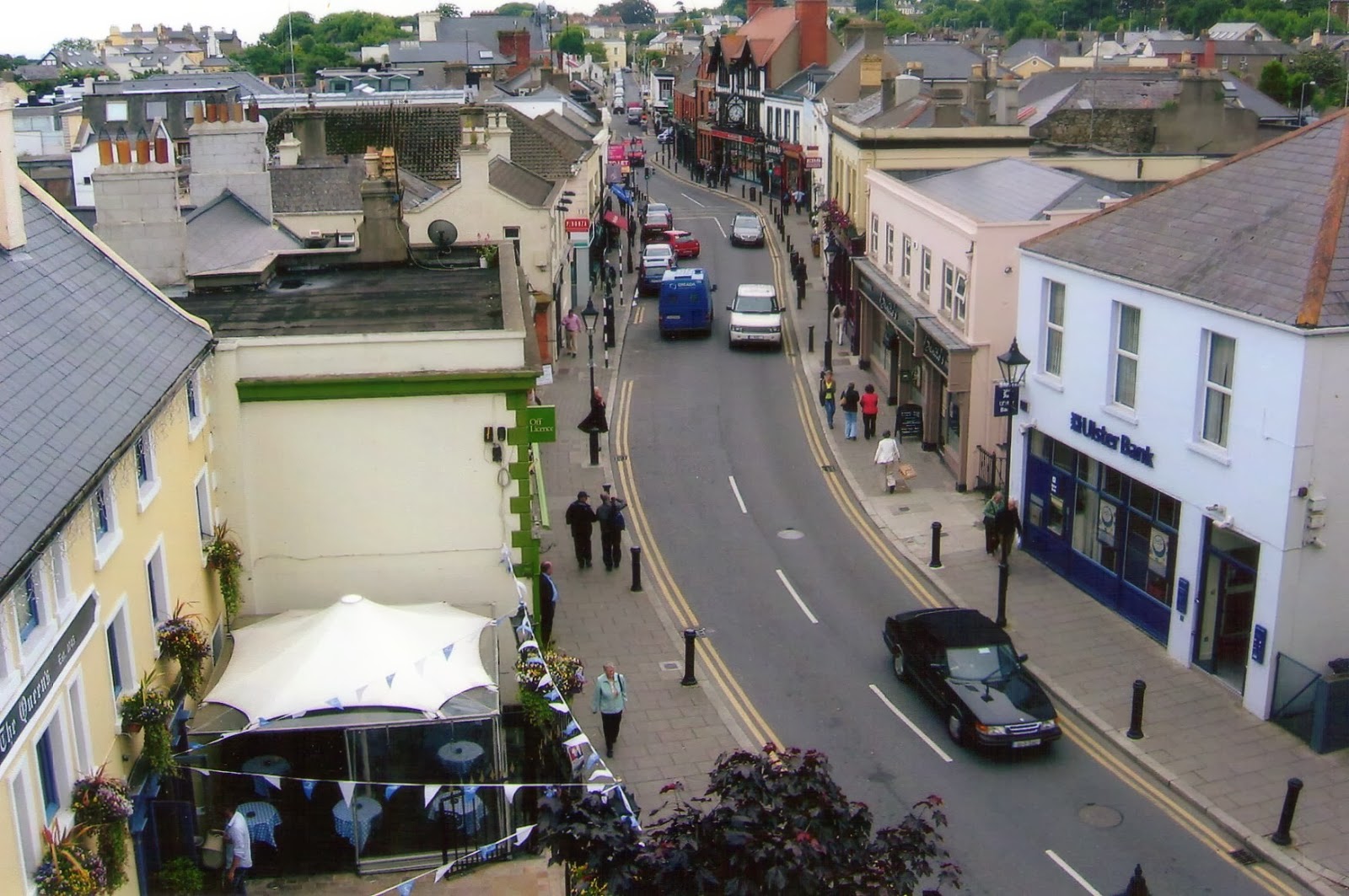 Dalkey is now considered  to be a suburb of Dublin, but it was originally a town in its own right and still retains a ‘small town’ feel about it.
Its main street houses a variety of shops, serving both the locals and the tourists. There are plenty of pubs and restaurants too. 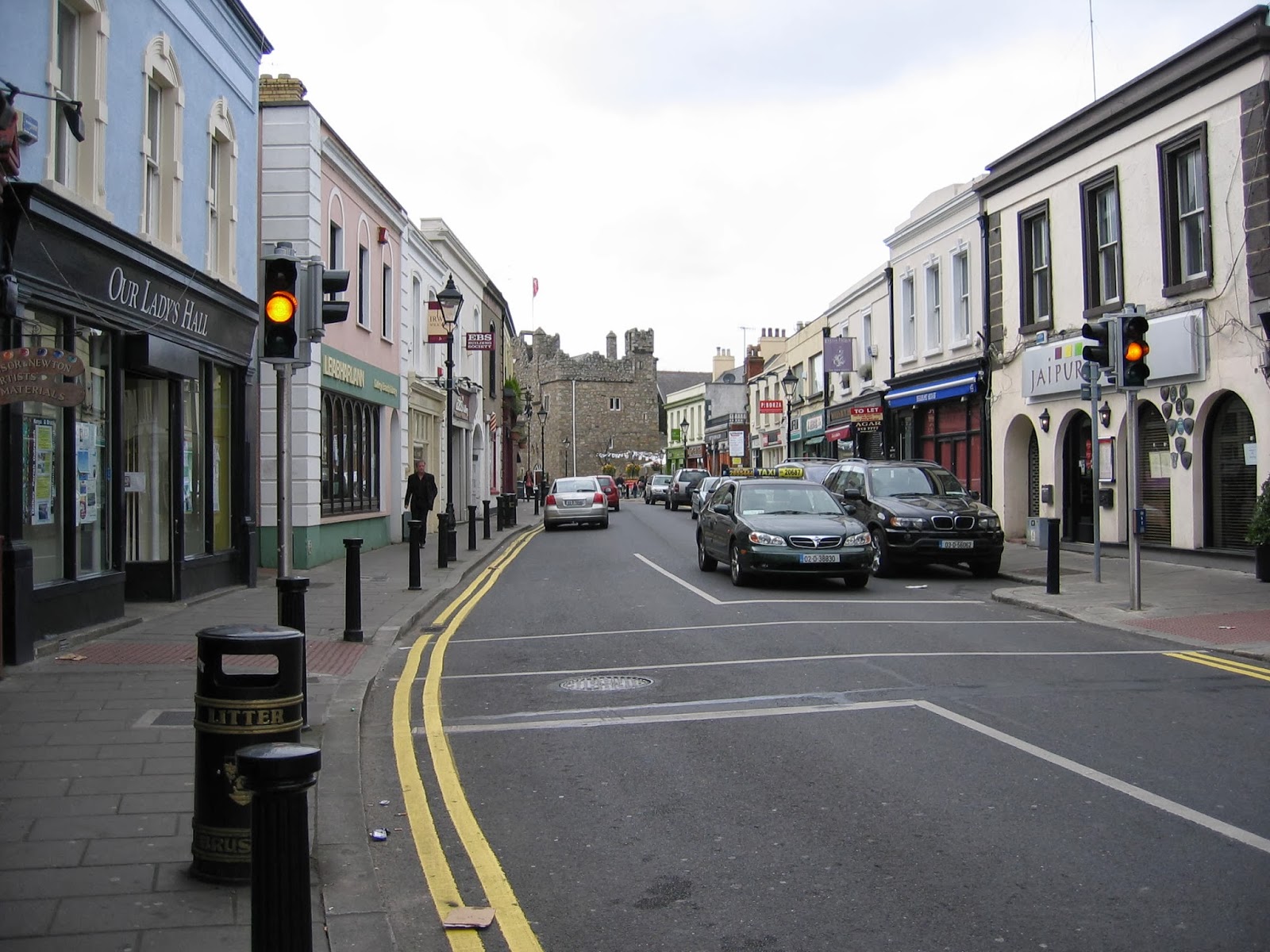 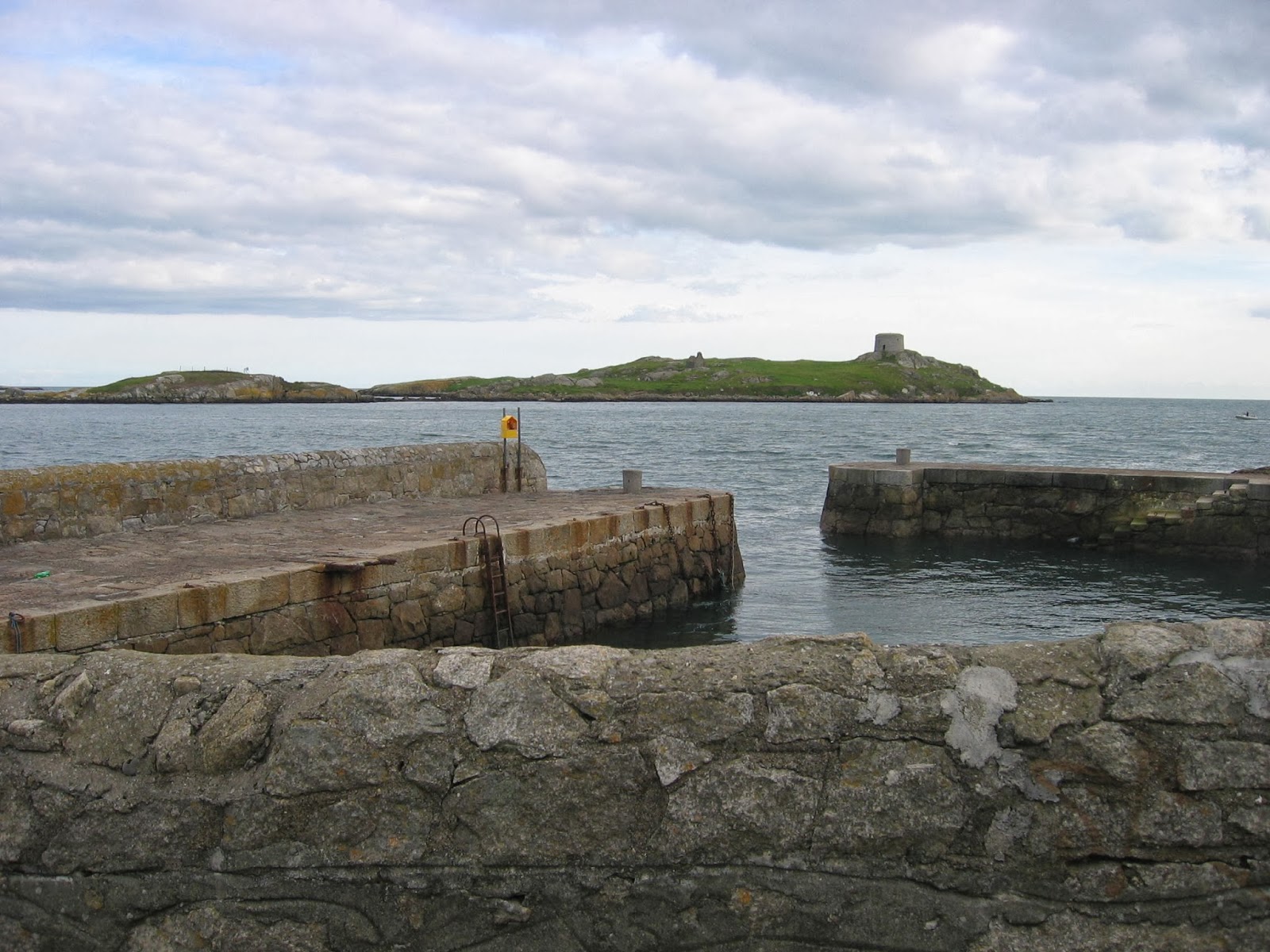 Originally founded as a Viking settlement, Dalkey became an important port during the Middle Ages, and there are still two harbours in use today. Bulloch Harbour is the larger of the two, but Coliemore Harbour is more picturesque with its view of Dalkey Island. 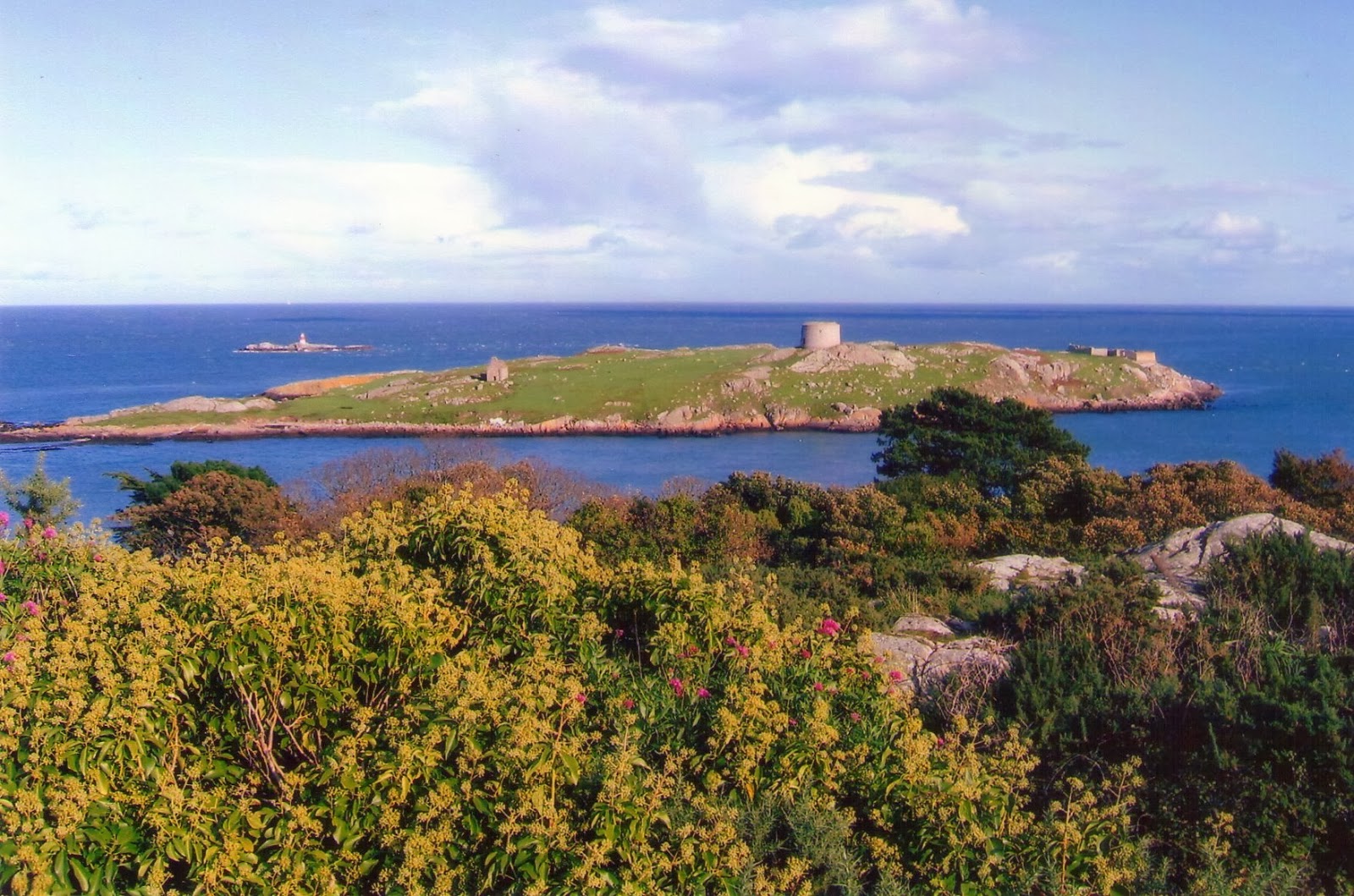 Dalkey Island, now uninhabited, apart from a herd of wild goats, was first occupied in the Stone Age. There are the ruins of a 9th century church which was probably abandoned when the Vikings used the island as their base. Today the island’s most striking feature is the Martello Tower, one of several erected along this part of the Irish coastline by the British Admiralty in the early 19th century, as part of the defence system against the threat of a Napoleonic invasion. 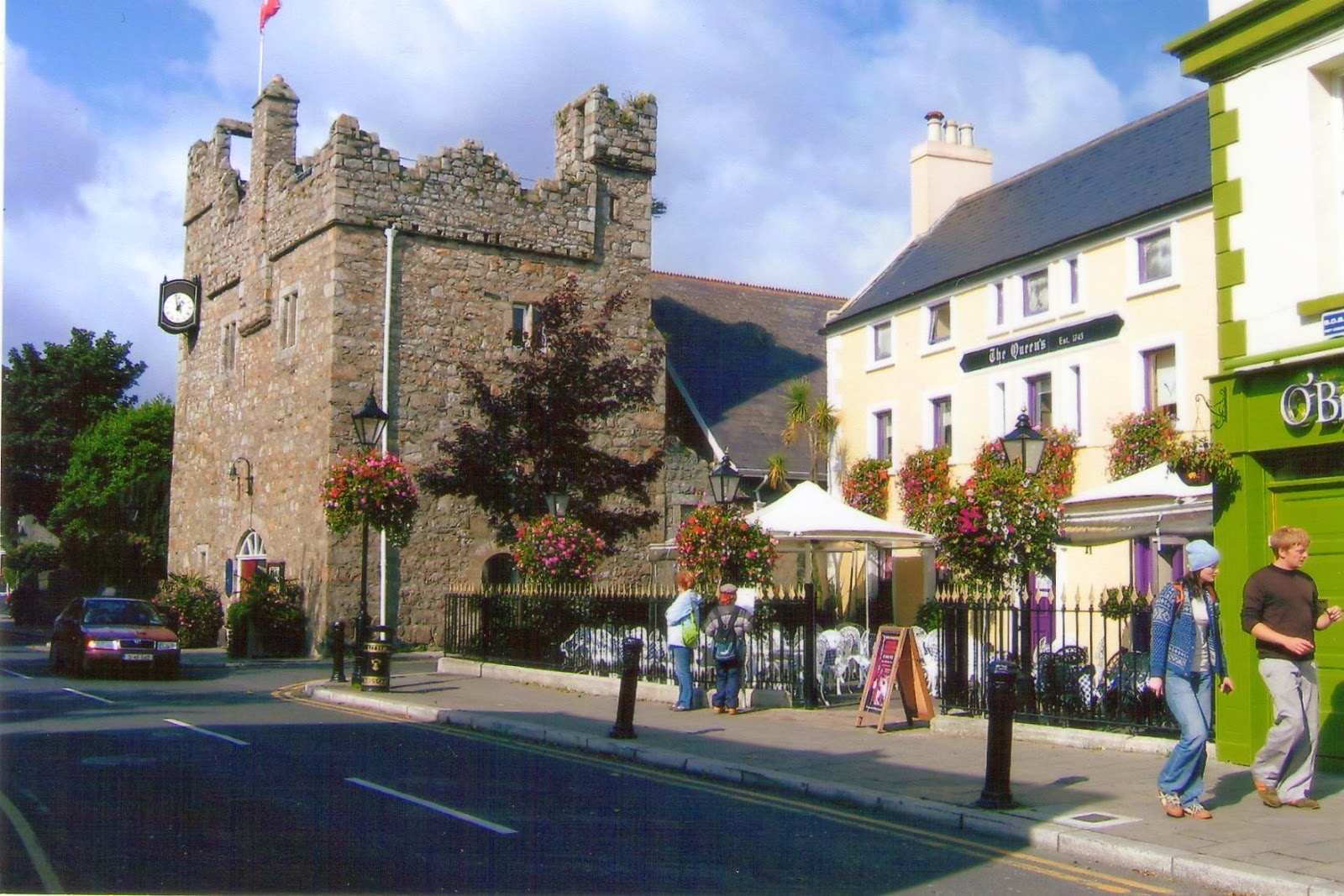 Dalkey once had seven castles, built in the 15th century as fortified townhouses. Only two still exist, and one of them (Goat Castle) dominates the northern end of the main street. It now contains the local heritage centre, and ‘Living History’ presentations take place during the summer months, with actors portraying maids and merchants, and describing life in the castle in the past.


Dalkey boasts a long list of famous people who have at some point made their homes here, from George Bernard Shaw and James Joyce in the late 19th/early 20th century, to modern musical stars like Bono, Enya, Chris de Burgh, and Van Morrison. An area south of the town, overlooking Killiney Bay, is home to the mansions bought by some of these millionaires. But then, who wouldn’t want a view like this from their house? 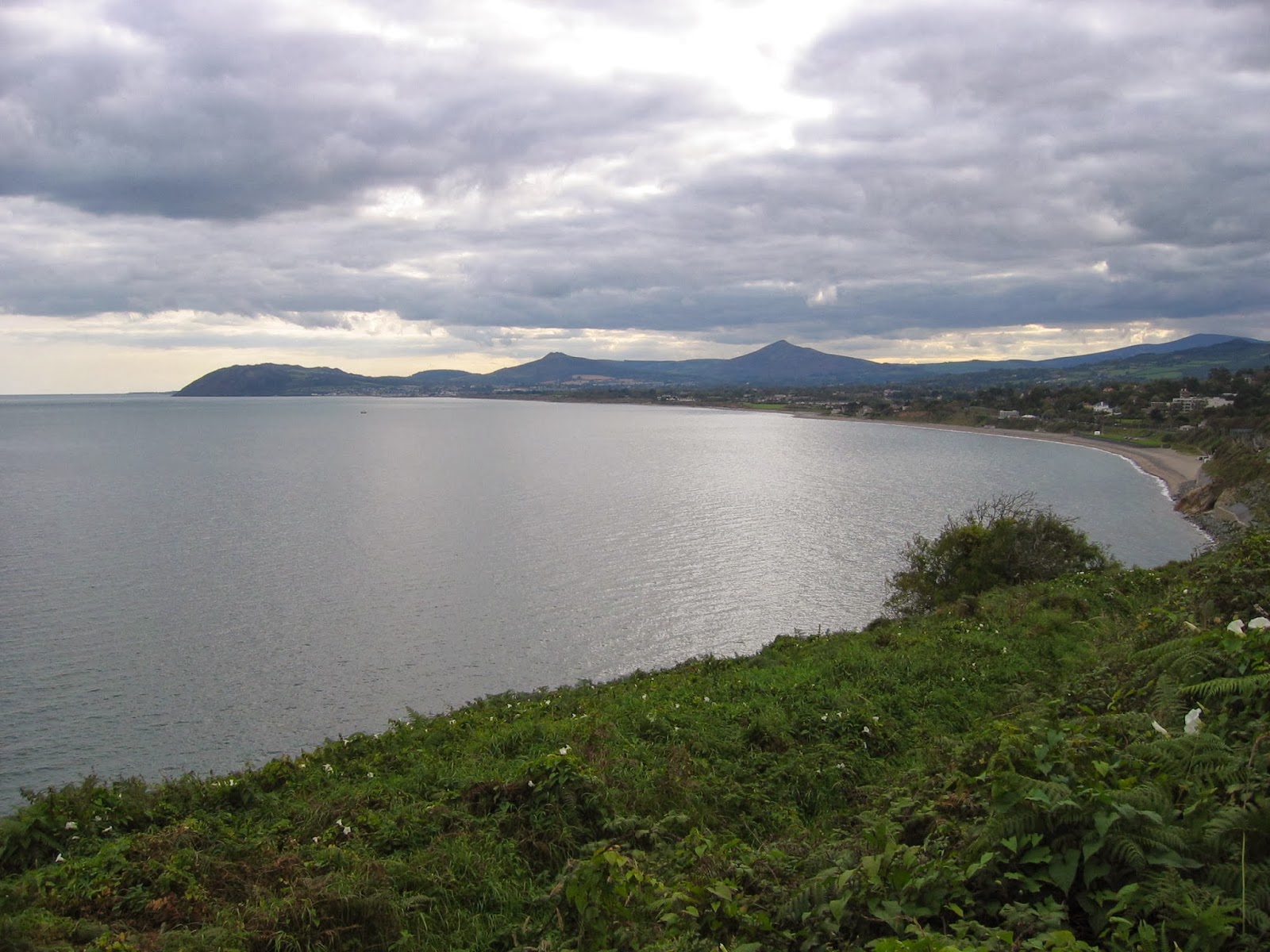 I’m continuing to feature some of the places that appear in my soon to be published new novel ‘Irish Inheritance’ –and today we're travelling through the Wicklow Mountains with Jenna and Guy. 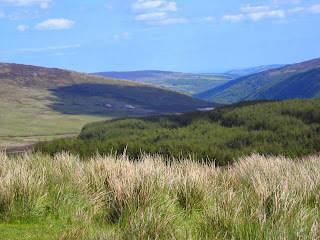 The Wicklow Mountains form the largest upland area in Ireland. They occupy the centre of County Wicklow, and extend over its border into the counties of Carlow, Wexford, and Dublin. The highest mountain is just over 3,000 feet, and several river systems have their source here. The upland areas consist mainly of blanket bog and heathland. 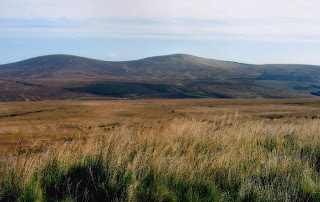 The mountains have been inhabited since Neolithic times, and several passage tombs can still be found in the area. After the English invasion in the 12th century, the mountains became a stronghold and hiding place for Irish clans who were opposed to English rule. They also harboured rebels during the 1798 Rising. At the start of the 19th century, the ‘Wicklow Military Road’ was constructed (and still used today as the R115 road). It runs for about 36 miles from north to south across the spine of the Wicklow Mountains, and was intended to make it easier for the British Army to seek out rebels and keep control of the area. 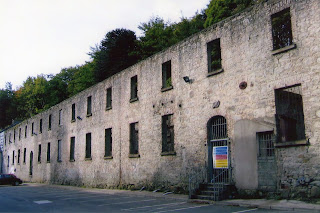 Four barracks were built along the road, including this one at Glencree, which housed 100 soldiers, from 1806 until the 1850s. The buildings later became a reform school for 300 boys, and the, during the 2nd World War, they became a temporary Refuge Centre for German and Polish war orphans, who were looked after by the Irish Red Cross.

After a short break over the holiday season, I’m featuring again some of the places that appear in my soon to be published new novel ‘Irish Inheritance’. Today we're visiting Glendalough in County Wicklow, which Jenna and Guy visited on their trip across from County Galway to the east coast of Ireland.
﻿
The monstery at Glendalough was founded by St. Kevin in the 7th century, and became an important monastic community until it was destroyed (by the English) at the end of the 14th century. The church remained as a place of worship and pilgrimage, and the buildings which survive probably date from about the 11th and 12th centuries.

The Round Tower, probably the most famous round tower in Ireland, is about 90 feet high, with an entrance about 10 feet from the base. Towers like this may have been built as bell towers, but also served as storehouses and sometimes as places of refuge.

The Cathedral is the largest and most imposing building at Glendalough and dates from the late 12th/early 13th century. This photo shows the square headed west doorway, and you can see the remains of the chancel arch, and the east window.

Nearby, St. Kevin’s Church has a steep stone roof, formed of overlapping stones and supported by semi-circular vault. The belfry, with four small windows, rises from the eastern end of the roof.

There are several other churches at Glendalough, and further up the valley with its two lakes, are the foundations of St. Kevin’s cell, which was about 10 feet in diameter, and probably had a bee-hive type of roof.

I'm sure that Guy, my hero, being American, would have been as impressed by these ruins as my Canadian friends were when I took them to Glendalough a few years ago!
Posted by Paula Martin at 22:38 11 comments: