My special guest today, Jennifer Wilck, talks about her new series of novels, each taking place around a Jewish holiday

I want to thank Paula for hosting me today on her blog. She doesn’t often have visitors on her personal blog, so I appreciate her allowing me to visit today. Miriam’s Surrender released on September 10 and I’m so happy that my vision for this series is finally coming to fruition.

Miriam’s Surrender is the second in my Women of Valor series. The first book, The Seduction of Esther, came out last year. At the time, I had an idea for a series in my head, and figured I’d try writing the first book to see how it worked.
In my head (often a scary place), I wanted to write a contemporary romance series, with each book taking place around a Jewish holiday. There aren’t a lot of romances that have Jewish characters or ones that take place in non-Christian settings. Weddings take place in churches, characters say a prayer before Thanksgiving Dinner or celebrate Christmas. I love reading those books, but I also wanted to see what would happen if I made the default religion Jewish rather than Christian. Honestly, diversity in books is important and fun!
The Seduction of Esther took place during the holiday of Purim. One of the themes of the holiday is hiding one’s identity. Well, that’s a great theme for a romance and it was easy to write. It’s gotten great reviews and people seem to appreciate the different perspective. So I sat down to write book number two.
Miriam’s Surrender takes place around Passover. The holiday is more well known because it takes place right near Easter. One of the Passover themes is freedom; again, a great theme for a romance. There are so many things you can free your characters from—their past, a secret, a person, etc. My hero in this book (who was the villain in the first one, by the way), hides a big secret from the heroine, and revealing it helped move the plot along.
Looking ahead to the rest of my series, I’d like to write at least four more full-length books, with maybe a novella or two thrown in. Each book can be read on its own, although characters from previous books do recur—as I said, Josh, the hero in this latest book was the villain from the previous book. I don’t know about you, but I like seeing what happens to characters after I write The End.
Please see below for more about Miriam’s Surrender. And I’d love to hear from you: what do you like, or dislike, about a series? What are your opinions on diversity in books? What’s your favorite holiday? 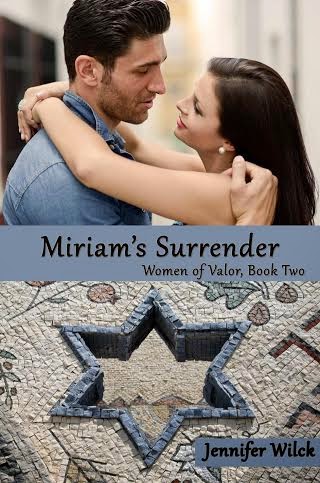 Blurb: Josh Lowenstein is a successful architect, hired to redesign the alumni club of a posh, private school in New York. He is strong, capable and knows the best way to do everything. Except let another woman in.
Miriam Goldberg is the Assistant Director of Outreach, and is Josh’s day-to-day contact for the redesign. She’s taken care of everyone around her, and forgotten how to let someone else take care of her.
With a tumultuous history, neither one is prepared to work together. As they get to know each other, the animosity disappears, but Josh is hiding something from Miriam and its discovery has the possibility of destroying their relationship. Only when they are both able to let the other in, and release some of the control they exert over everything, will they be able to see if their love can survive.
Excerpt:


“I’m glad you agreed to have dinner with me. Maybe we’ll do it again?”
“I’d like that.” She looked at Josh and smiled.
He tipped his head and Miriam could feel his breath warm her face. Mere inches apart, she could see silver and black flecks in his irises, stubble on his cheeks, the arch of his eyebrow. Shivers zinged up her spine. Like a magnetic pull, she wanted to lean into him, to feel his body against hers, to press her lips against his. But they worked together, and a kiss would change everything. As if he read her mind, he pulled back, said goodbye and got into the cab and drove away. Miriam covered her lips with her fingers.
What in the world was she supposed to do now? He’d come close to kissing her. She could still feel the electric charge between them; still catch a slight scent of his musky aftershave in the air. His hand had held her arm with enough pressure to keep her against him. Although she’d watched him leave, she could still feel the imprint of his touch. She stroked her hand up and down her arm.
Did she give away how much she wanted to kiss him too? It was so quick, so unexpected, she couldn’t be sure. Her mind shot off in all directions as she entered her building and took the elevator to her fifth floor apartment.
They worked together! How in the world was she supposed to look at him when they next met? Should she acknowledge the kiss that almost happened? Should she pretend it never did? He didn’t plan on discussing it at their next meeting, did he? 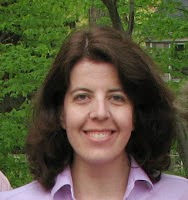 Links: Jennifer can be reached at www.jenniferwilck.com or http://www.facebook.com/pages/Jennifer-Wilck/201342863240160. She tweets at @JWilck. Her blog (Fried Oreos) is www.jenniferwilck.blogspot.com and she contributes to Heroine With Hearts blog on Tuesdays http://www.heroineswithhearts.blogspot.com and Front Porch Saturdays at Sandra Sookoo’s Believing is Seeing blog http://sandrasookoo.wordpress.com.
Buy Links:
Miriam’s Surrender
Amazon: http://www.amazon.com/Miriams-Surrender-Women-Valor-Book-ebook/dp/B00NFR6X9C/ref=sr_1_2?ie=UTF8&qid=1410358293&sr=8-2&keywords=jennifer+wilck
Barnes & Noble: http://www.barnesandnoble.com/w/miriams-surrender-jennifer-wilck/1120324885?ean=2940150711891
AllRomance: http://www.allromanceebooks.com/storeSearch.html

Good luck with Miriam's Surrender, Jennifer - and I look forward to more in your series.

Do you have 'favourite' occupations for your heroes/heroines?

Continuing my 'recycling' of past blogs which I think are worth repeating, here's another 'A' blog from my archives.

In three of the six books I’ve had published since 2011, my heroines have been actresses. In His Leading Lady Jess is a talented amateur actress who takes the opportunity to replace her sister on the professional stage in London. In Fragrance of Violets, Abbey has had a successful acting career but loses confidence after she fails to win a coveted role. My most recent release, Irish Inheritance, has a struggling actress, Jenna, who has given herself five years to discover whether she is good enough to make acting her lifetime career.

Why do I choose to have actresses as my heroines? I’ve never been an actress, apart from a few small roles in amateur plays when I was younger. I soon realised I wasn’t very good, and I can’t sing or dance either.

The first answer to the question is that I’ve been stage-struck for almost as long as I can remember. My mother used to take me sometimes to plays performed by the local repertory company. I still remembered being enthralled by a production of Jane Eyre when I was about ten. A couple of years later it was a school production of The Importance of Being Earnest that caught my imagination, and soon after this, a local amateur group introduced me to musical theatre, which I have loved ever since I first saw Oklahoma on the stage.

Fast forward about 20 years, and we come to my second answer. In the 1980s, when my daughters were in their early teens, I was the leader of a Girl Guide Company, and we decided to ‘put on a show’, namely ‘The Wizard of Oz’. That was the beginning of about 15 years of producing musical shows, first with the Girl Guides, and then with the junior section of the local Musical Theatre Group. Maybe I couldn’t act, sing or dance myself, but this was the next best thing. I was privileged to work with a lot of talented teenagers, and to see them develop from shy chorus members to confident youngsters who took the lead roles with self-assurance and amazing stage presence. Indeed, some of them went on to drama school and then the professional stage.

I also worked backstage with two musical theatre groups for several years, doing costumes, props, or as a stage hand. I know first-hand that there is no experience in the world like ‘show week’ at the theatre, with combination of panic, nerves, adrenalin, laughter, camaraderie, and the sheer satisfaction at the end of each evening.

Maybe this goes in part to explain why my heroines are actresses. It could be a subconscious yearning on my part, a wish that I’d had a talent for acting. At the same time, the theatre is an environment with which I am familiar (and even know some of the jargon!). Although I’ve worked with amateur groups, I’ve been backstage at two major professional theatres. The latter use far more high-tech stuff than the amateur theatre can afford but the process of rehearsals, backstage preparations, and actual appearance onstage is not much different from the amateur world.

Finally, from the purely practical angle of having actresses in my novels, it’s often useful to have a heroine who isn’t doing a nine to five job, as they can have periods when they’re not working at all!