The final excerpt from my 2011 release of 'His Leading Lady' about the first meeting between Jess and Kyle.


“Oh, and by the way,” Kyle added, as he reached the door and looked back at her, “there’s one more difference between you and your sister. You have far more spirit and I like a feisty woman.  Au revoir, Ms. Harper.”
“Goodbye, Mr. Drummond,” Jess said very firmly.
The door clicked shut behind him, and she let out a short grunt of exasperation, followed by a sudden wry smile. At least he’d conceded that she’d given as good as she got.
Thanks to everyone who has followed this series of excerpts and left comments for me.
I'll be back in the New Year with an excerpt from  my new book 'Fragrance of Violets' which will be released by Whiskey Creek Press in February.
Meantime, you can read the whole of Chapter 1 of 'His Leading Lady' at the Whiskey Creek website, or at Amazon
www.whiskeycreekpress.com or http://amzn.to/opp1ky

Check out the other 'Six Sentences' here.
Posted by Paula Martin at 08:38 12 comments:

Another six-sentence excerpt from my 2011 release of 'His Leading Lady' with the first meeting between Jess and Kyle. This is a continuation from last week when Jess told Kyle she had no idea where her sister Lora was.

Kyle walked towards the door, then turned.  “If she contacts you, remind her that if she isn’t at the television interview on Friday, her contract will be terminated.  That will blacklist her at every theatre.”

Jess stared at him and knew he meant it, but she kept her voice steady. “I’m sure she realises that, and I’m sure she’ll be there.”
“I can only hope so."
Thanks to all who've been following these excerpts. There'll be the final excerpt from this first meeting next week!

Check out the other 'Six Sentences' here.
Posted by Paula Martin at 08:44 16 comments:

Today I received the contract for my third novel with Whiskey Creek Press, and I'm over the moon!

'Her Only Option' is set in Egypt, which I visited, and fell in love with, just over a year ago. Visiting Luxor and the Valley of the Kings was a dream come true. Seeing the sun rise over Lake Nasser and illuminate the massive statues of the Abu Simbel temples was one of the most memorable experiences of my whole life. 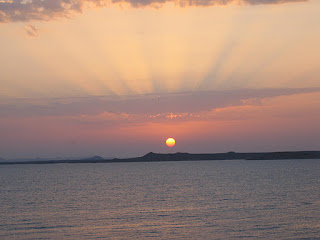 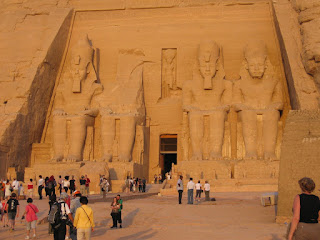 One afternoon, I was relaxing on the sundeck of our Nile cruise ship which was moored at Aswan. There are so many ships that they have to be moored four abreast, and the sundecks of neighbouring ships are more or less level with each other. I started to wonder if it would be possible to vault across the short gap from one sundeck to another. Not that I had any intention of trying it, you understand! 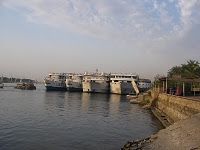 That evening I put the question to one of the friends we had made on the trip.  He walked across to the rail, studied the gap for a moment, then said, “Well, I wouldn’t try it now, but I could have done it easily when I was in my twenties or thirties.”

First piece of research completed - it was possible. And I could see my hero doing his death-defying leap (slight exaggeration!) to be with the heroine.

So now what? Are the hero and heroine guests on different cruise ships? But the cruises only last 5 or 7 days, so what would happen when they returned home?  No, I needed to have them both living in Egypt, so maybe the heroine could be a tour guide on a cruise ship.

What about the hero? On a flight from Luxor to Cairo, I read an article in the flight magazine about an archaeologist who had explored a hidden tunnel leading from the burial chamber of one of the Pharaoh’s tombs in the Valley of the Kings. Hmm, maybe my hero could be an archaeologist in the famous Valley.

With the setting and the two main characters in place, it was time to start thinking of the complications and conflicts that would prevent the course of love running smoothly. I wrote the first two chapters at the hotel in where we spent a week after the end of our cruise. Writing in longhand again in a notebook (which the very nice Egyptian in the hotel bookshop acquired for me) reminded me of my early (pre-computer) writing days.

When I got home, I tranferred my scribble to the computer, and got on with the rest of the story, which ended up with more twists and turns than I'd first envisaged, including a Nile boatman who sang Elvis songs, who invented himself part way through the story!
Here, then, is the blurb for 'Her Only Option':


Neve Dalton loves her job as a tour guide on a River Nile cruise ship as much as she values her independence. She isn’t ready to settle down with her Egyptian boyfriend, despite his repeated proposals and his father’s desire to see him married.
Nor is she ready to meet Ross McAllister, a compelling and fascinating archaeologist. She struggles against her growing attraction to him until she can no longer ignore what her heart is telling her. This is the man who sets her soul on fire.
After breaking up with her boyfriend, she starts receiving cryptic messages, and Ross’s work in the famous Valley of the Kings is threatened. Neve has to make a heart-breaking and life-changing decision which seems to be her only option.
Can Ross discover whose enmity is forcing them apart before it’s too late?
Oh, and by the way, I never did manage to bring in the scene where the hero vaults the rails between the two cruise ships. But I did call my hero Ross, after the cruise-ship friend who told me it could be done!
Posted by Paula Martin at 18:45 9 comments: