My imaginary interview with Neve, the heroine of ‘Her Only Option’, set in Egypt.

I’m now on the Lady Nadia cruise ship, waiting in the lobby to interview tour guide Neve Dalton. Ah, I can see her now, running down the stairs – oh dear, she doesn’t look very happy …

Has something upset you, Neve?

I’ll say it has! I went up to the sundeck for some peace and quiet until my next tour group arrives, and next I know, I’m being chatted up one of those cruise ship Casanovas – you know, the smooth-talking posers who think female tour guides are an easy target. And this one had the nerve to say tour guides churn out half-baked facts from inaccurate guide books!

I take it you weren’t impressed?

Well … (Neve blushes) … he was rather good-looking, with amazing blue eyes - but then he tried to claim he was an archaeologist. Huh! Probably one of those dilettantes who think they can make the discovery of a lifetime without any effort. Anyway, enough about him. I’m only thankful he’s on the Lady Amirah and not the Nadia, although I don’t envy my friend Joanne having to put up with him on this week’s cruise.

Er – how did you meet him if he’s on a different ship?

Oh, haven’t you been up to the sundeck? The Nile cruise ships have to be moored 3 or 4 abreast because there are so many here in Luxor, and they’re built to the same design, so the sundecks are level. Joanne and I often meet up to have a chat over the rails.

Let me ask you more about yourself and Joanne. I believe you’re both Cambridge postgraduates, so why did you decide to become Nile cruise ship guides?

We both felt we needed a break from the academic life. This job with the Rahman cruise line has given me the opportunity to return to Egypt where I grew up, and to share my passion for Ancient Egypt.

(Neve narrows her eyes) I hope you’re not going to make some derogatory comment about me dating the boss’s son?

I wouldn’t dream of doing that!

I like Malik, he’s –well, as Joanne has said, he’s good-looking, charming, worships the ground I walk on, and he’s filthy rich, but—

But you’re not in love with him?

I can’t be, can I? Otherwise I’d have accepted his proposal.

So he’s asked you to marry him?

Oh yes, several times. But, between you and me, I think the only reason for his proposals is because his father won’t give him any senior role in the company until he’s ‘settled’ - which to Sabry means married with a whole brood of sons to inherit the Rahman empire. And I’m not ready to settle down as a wife and mother. Anyway, if you’ll excuse me now, I need to go and warn Joanne about that annoying self-styled archaeologist she’ll have to put up with on the Lady Amirah this week. Bye!

I wonder if Neve will change her mind about that annoying self-styled archaeologist? 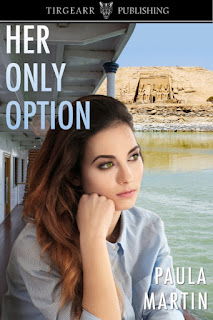 All my books are available from
Amazon  or from Tirgearr Publishing
Posted by Paula Martin at 13:00

Will Liam and Rose resolve the shadows of the past and find a future together?