To complete my A-Z blogs, here’s a teaser from my recently completed novel ‘Family Secrets’ (I’ve no idea yet when/if it will be published – so watch this space!)

Seamstress Betsy Roberts meets John Hughes, a mariner with the Isle of Man Steam Packet Company, on a Liverpool street one freezing January night in 1844. Attraction sparks between them, but neither is aware of the huge obstacle in the way of their courtship.

John is the son of Dottie Hughes nee Butler, and Betsy’s mother is shocked when Betsy tells her that John wishes to court her. She explains the reason:

‘Listen, Betsy, you must never tell your pa I’ve told you this, but you need to know so you’ll understand. You’re right about him not liking sailors—’

Betsy sighed. ‘Aye, because he always says they’re only interested in getting drunk or seducing young girls, but they’re not all like that, are they?’

‘No, but hear me out, will you?’ Sarah took a few seconds to compose herself. ‘Your pa had a younger sister he was very fond of. There was only about a year between them. Eliza, she was called. Anyhow, she fell in love with a sailor, but as soon as he got her in the family way, he abandoned her. Poor Eliza was so ashamed of bringing disgrace to her family, she – well, there’s no easy way of saying this, but she jumped into the Salthouse Dock and drowned. She was only seventeen.’

Betsy’s face creased in dismay. ‘Oh, Mam, how awful. No wonder Pa is so bitter about sailors.’

‘You want to know what makes it worse? The sailor was Dottie’s brother, John’s uncle.’

Her mouth agape, Betsy stared at her mother. ‘No, surely not!’

‘Yes, Zack Butler. I never met him because it happened before I married your pa, and Zack went off to Australia. But that’s why your pa won’t say a good word about sailors, and why he’s refused to speak to any of the Butler family ever again.’

Not an ideal scenario for Betsy and John’s courtship, is it? How can her father ever accept the nephew of the man who caused his sister’s death?

I've no front cover to show you yet, but here's a picture of the Isle of Man Steam Packet Company boat, Ben-my-Chree, which John (my g-g-grandfather) captained in the 1850s. 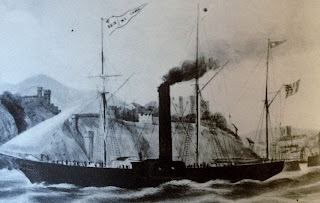 Well, that’s the end of the A-Z Blogging Challenge for this year. I hope you’ve enjoyed my posts!