It’s April 1st which means the start of the 2012 A-Z Blogging Challenge, and this year I’ve decided to have a theme: the English Lake District. It’s a beautiful area of lakes (as its name suggests!) and mountains which covers an area of almost 900 square miles in the county of Cumbria in North West England.

The southern part of the area is about 60 miles from where I live and I know it very well. I’ve been going up to ‘the Lakes’ since I was in my teens. My parents bought a caravan there, which I ‘took over’ from them in the 80’s and I went up there as much as I could, with my own two daughters (and often one or more of my friends or theirs).

I’ve also set several of my novels there: ‘Fragrance of Violets’, published in February 2012 (see left side panel), ‘Changing the Future’ (due for release in June 2012), and my current ‘work in progress’.

So come with me on a journey of discovery around this wonderful area in North West England. I’ll give you some interesting facts about many different places, as well as some personal reminiscences.

Today we start with: Ambleside, a small town with a population of about 2,600, situated at the head of Windermere, England’s largest lake.

To the south of the town are the remains of the Roman fort of Galava, dating from AD79, one of the small forts built to guard the Roman road to the coast. The name of the town, however, comes from the Norse “A-mel-saetr’ meaning river – sandbank – summer pasture.

In 1650 the town was granted a charter to hold a market, and it became a commercial centre for agriculture and the wool trade.

Nowadays, tourism is the lifeblood of the town, which provides a base for hikers and climbers, and it is usually very busy during the summer season. There are plenty of hotels, guest houses and restaurants, as well as 10 pubs or bars within a quarter-mile radius. In addition to the inevitable souvenir shops, there are also a number of shops dealing in specialist arts and crafts, and stores selling clothing and equipment for outdoor pursuits.

One of the most interesting buildings in the town is Bridge House, a small house built over the small river called Stock Ghyll. It’s said that at one time a family with six children lived here, with just one room downstairs and one room upstairs. Later it was used as an apple store, and in 1926 it was sold to the National Trust which now looks after it. 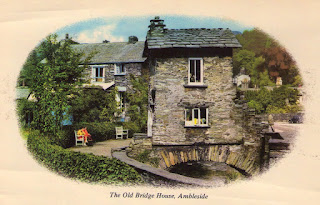 The photo of the right is an old postcard which I kept because the two people sitting near the Bridge House are myself and my friend and I think it was taken in the early 60’s. As the house is probably the most photographed place in Ambleside, we probably didn’t even realise at the time that we were being photographed, let alone that we were going to appear on a postcard! Artistic licence has changed the colours of our jackets to look like the modern, brightly coloured kagools.

We often used to go into Ambleside if it was raining (which it frequently does in the Lake District!) to do some shopping, have a pub lunch, and then spent half the afternoon in one of the coffee shops.

Find the other A-Z participants here
Posted by Paula Martin at 09:45

Will Liam and Rose resolve the shadows of the past and find a future together?