Thursday Tour of NW England - Newchurch and the Pendle Witches

Newchurch in Pendle, a small village in the shadow of Pendle Hill, is famous for being the home of the Demdike family of ‘Pendle Witches’. 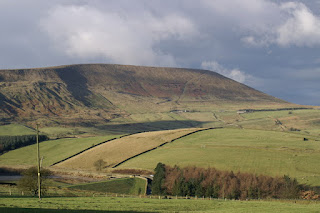 The story is that, in 1612, Demdike's granddaughter, Alizon Device, approached a pedlar called John Law and asked him for some metal pins but he refused. A few minutes after their encounter, he stumbled and fell badly. He recovered enough to reach a local inn and a few days later, his son took Alizon to see him and she confessed to him that she had told the Devil to lame him. The Law family then complained to the local Justice of the Peace, Roger Nowell, that John had been injured by witchcraft.

At the time, village ‘healers’ who dabbled in herbs and home-made medicines were often thought of as witches, because of their seemingly magical powers, and Alizon’s grandmother, Elizabeth Southern, known as Demdike, had long been considered a witch.

In the investigation which followed, Roger questioned Alizon about another family, the Whittles, who were also suspected of witchcraft. There was no love lost between the two families, and so Alizon accused Anne Whittle, known as Chattox, of killing four men by witchcraft. She also claimed that her father had been so scared of Chattox that he had paid her an annual gift of oatmeal in return for her promise not to hurt his family. On his deathbed, he claimed his illness was because he had not paid the annual fee of protection.

When both Demdike and Chattox were summoned to appear before Nowell, they were both in their eighties, and both confessed to witchcraft, saying they had sold their souls to the Devil many years earlier. Witnesses said they had seen Demdike sticking pins into clay figures, and one said her brother had fallen ill after having an argument with Chattox’s daughter, Anne.

Based on the evidence and confessions, Demdike, Alison, Chattox, and Anne were committed to Lancaster Gaol to await trial at the next Assizes for causing harm by witchcraft.

A few days later, Demdike’s daughter Elizabeth organised a meeting at the family home, Malkin Tower (thought to be near the village of Newchurch). Family and friends attended, but Roger Nowell was suspicious about the purpose of the meeting, and following further investigations, eight more people were accused of witchcraft and sent for trial.

The trial was held at Lancaster Castle in August 1612. One of the key witnesses was the Alizon’s nine-year-old sister Jennet Device (something that would not be permitted in other trials at that time but was allowed in cases of witchcraft). Jennet gave evidence against her mother, sister and brother, and also identified all those who had been at the Malkin Tower meeting. She claimed that both her mother both had ‘familiars’ in the shape of dogs.

One of the accused died in prison, another was found not guilty, but the remaining ten were found guilty and hanged.

Was it ‘witchcraft’? Or was it simply local suspicion about eccentric old women, compounded by the bad blood between the two families which led to them accusing each other of witchcraft?

The story of the Pendle Witches has been immortalised in novels and plays, and has provided the Pendle area with a tourist attraction. The only shop in the Newchurch village, Witches Galore, sells all manner of witch-themed dolls and other gifts. 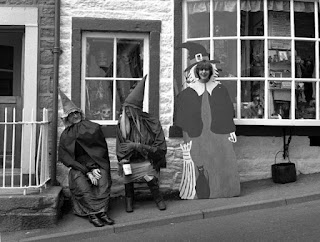 This year is the 400th Anniversary of the Witch Trials and there have been several events and exhibitions, both in the Pendle area and in Lancaster, where the trials were held. Last weekend, a statue was unveiled at the village of Roughlee of Alice Nutter, one of the so-called witches, who pleaded not guilty to a murder but was neverthless convicted because she had been at the Malkin Tower meeting. Here's a link to a local newspaper article, with a photo of the state http://www.bbc.co.uk/news/uk-england-lancashire-19028459
Posted by Paula Martin at 10:39