Ribchester is a village in the Ribble Valley. It lies at the foot of Longridge Fell and on the banks of the River Ribble about 12 miles from my home town of Preston. As a child, I used to go there quite frequently, often for picnics on the banks of the river.

I think we simply took it for granted that there were Roman remains scattered around the village and at the time there was a small museum, just one room with some dusty artefacts. Since then the museum has been enlarged and modernised with innovative displays, and you can now follow a Ribchester History Trail around the village.
The village was once an important Roman cavalry fort called Bremetenacum. The first fort was built in timber in AD 72/73, renovated in the late 1st century AD and rebuilt in stone in the early 2nd century. During the life of the fort, a village grew up around it. The Romans remained at Ribchester until the 4th century AD. 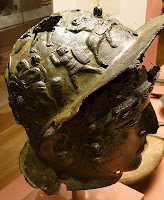 The most famous artefact discovered in Ribchester is an elaborate cavalry helmet. It was discovered in 1796 by the son of the local clogmaker, buried in a hollow, about three feet deep, on some waste land by the side of the road leading to the church. The “Ribchester Hoard” (as it became known) also consisted of a bust of the goddess Minerva, and fragments of vases, basins and plates. They were thought to have survived so well because they were covered in sand. Later the hoard was sold to the British Museum.

The original church of St Wilfred was built in the 7th century over the site of the Principia (headquarters building) of the Roman fort and was replaced by a stone church in the 13th century. The remains of Roman granaries have been found next to the churchyard.
Early archaeological work concentrated mainly on the area of the fort, but during the latter part of the 20th century, the ‘vicus’ (civilian settlement) beyond the fort walls was explored more thoroughly. Excavations have revealed rectangular wooden buildings used as workshops and dwellings where craftsmen, especially metalworkers and leatherworkers provided essential goods for both civilians and military personnel.
The vicus was also the site of the baths, the most substantial stone built construction outside the fort, and at least two temples.
Ribchester’s later history was dominated by cotton weaving, firstly hand-loom weaving when the villagers worked in their own cottagers, and later in two mills (Bee Mill and Corporation Mill) on the northern edge of the village. 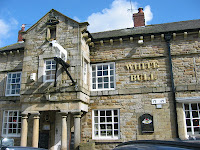 Today the village is primarily a ‘dormitory’ village for commuters to the nearby towns of Blackburn and Preston. Probably its most recognised building is the White Bull Pub in the middle of the villager,  well known for its portico, which is said to be supported by two pillars taken from the Roman fort.

Photos in public domain and/or licensed under the Creative Commons Attribution 2.0 Generic license.
Posted by Paula Martin at 15:31

Email ThisBlogThis!Share to TwitterShare to FacebookShare to Pinterest
Labels: Ribchester