Romancing the Hop -all about Romance! 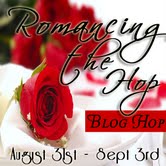 What is your favorite thing about Romance? We authors are sharing our romantic tips and favorite romance reads! Starting today August 31 and ending on September 3rd, over 200 Authors and Bloggers will share their favorite things about romance, reading romance, and dating.
And while we do that, we are EACH doing a giveaway. Yep. There will be over 200 giveaways by authors or bloggers.
But that's not all....
We have THREE grand prizes. You as a reader can go to EACH blog and comment with your email address and be entered to win. Yep, you can enter over 200 times!
Now what are those prizes?
1st Grand Prize: A Kindle Fire or Nook Tablet
2nd Grand Prize: A $130 Amazon or B&N Gift Card
3rd Grand Prize: The following Swag Pack! (USA only - sorry!) 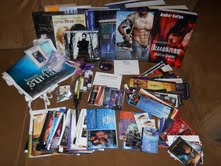 Yep. ALL of that! Be sure to leave a comment here, and then visit some of the other writers. Enjoy stories and facts about our favorite Romance events and leave comments for more chances to win!
Why do I write romance?
Short answer – because I’ve always written romance!
Well, not always. My first stories, as a pre-teen, were school or theatre stories, but once I hit adolescence, I read romance and I wrote romance. My teenage stories, written for my friends, had 1940’s movie-type romance, usually with our current heart-throbs as the male heroes. I wrote stories inventing romances between our favourite teachers, and later, about the boys my friends and I liked. I’m sure I could be sued if any of those had ever gone further than my friends’ hands!
Of course, even those stories were supposedly based on ‘real’ people, they were still imaginary. In fact, my first published novel was a re-hash (and fuller development) of a story I’d written in my teens – names and places changed, of course! In later novels I developed my own characters, who became as real to me as the earlier characters in my stories.
I’m a romantic at heart, maybe because (or despite the fact that) real life has proved different for me. Writing romance allows me (and hopefully my readers, too) to relive the magic of falling in love – the delicious anticipation as you wait for the next time you’re going to meet up, the simple pleasure of holding hands, even the lightest touch on your back as he escorts you into a restaurant, the exchange of glances across the table.
The most sensually romantic scenes aren’t the bedroom scenes. They’re the scenes where tender looks and the briefest of contact can make your heart sing. Your heartbeat quickens, you feel those delicious tingles down your spine, that shiver of excitement, and the whole world’s a magical place because you’re in love.
Here’s an excerpt from my contemporary romance ‘Fragrance of Violets’ when Abbey’s sister Louise has asked her if she’s fallen for Jack:
Abbey hesitated.  “I – I honestly don’t know. There’s a kind of attraction but that could simply be because he oozes confidence and charisma or –” She shrugged helplessly. “I just don’t know.”
“So does your heart beat faster when you’re with him? When you think about him? Do you get a tingle deep down inside you, and then start wondering what it would be like to go to bed with him?"
“Louise!”
“Well, do you?”
“No!” This time the denial came out too strongly. Quickly she went on, “And even if I did, that would be lust. Not love.”
“Falling in love starts with being attracted to someone, for whatever reason. Then, as you get to know them, you find you like them as a person – or not, as the case may be. But you already know Jack, you know what he thinks and believes and likes and doesn’t like.”
Abbey shook her head. “That was when we were teens. We’re different people now.”
“I bet you’re not all that different. Does he still look the same or is he fat and bald now?”

Abbey laughed. “Of course he isn’t, and he does still look the same except –” She considered for a moment then smiled. “He’s matured. He still has those gorgeous blue eyes, of course, and sometimes you can read what he’s thinking, but other times they’re more guarded. And his hair’s slightly darker than it used to be, it’s kind of golden now but he has the same mannerism of pushing it back from his forehead and then taking his hand right down to the back of his neck. And when he grins, he reminds me of teenage Jack, it’s a kind of quirky grin that makes him look younger. His shoulders seem broader but his hips are slim and he looks good in jeans because he’s got a real sexy walk – What?” She broke off as she saw Louise grinning at her. “What? You wanted to know what he’s like, and I’m telling you.”

“You’ve fallen for him.”

“Why on earth do you think that? I’m just describing what he’s like now.”

“If you were just describing him, you’d simply have said ‘oh, pretty much the same, maybe broader than he was’ and left it at that. But you’re aware of everything about him, aren’t you?”

Abbey looked at her sister for a moment and then nodded. “Yes – yes, I suppose I am.”

It was true. Jack set all her senses on fire, not just when she was with him, but whenever she thought about him too.

And here, from my recent release ‘Changing the Future’, are Lisa’s thoughts when she’s sitting at a lecture with Paul, having met him again six years after their acrimonious breakup.

Paul’s nearness distracted her, especially the faint musky scent of his aftershave which was disturbingly familiar. Carefully she moved her arm away from the armrest between their seats where his elbow rested, but she couldn’t stop herself from glancing at his firm thigh. How many times had she stroked his thigh, sliding her hand sensuously back and forth? Sometimes she’d tormented him by almost, but not quite, reaching his groin; other times she’d put her hand over the bulge in his trousers and he’d given her his smouldering sexy grin.

Heavens, why was she thinking about that now? Her cheeks grew hot. She had to distance herself from this agonising awareness of him. There were moments she could hardly believe it was all really happening, and she wanted to look round to convince herself it really was Paul sitting next to her. Moments, too, when she longed to put her hand on his leg again, feel his hand covering hers, and then lifting it to kiss her fingers, sending delicious electric shocks through her. Moments when she wished they could wipe out the past and start again.

I think many women need some kind of escapism into a world where the heroes are gorgeous and romantic, and say and do all the things they’d love real-life men to do (but often – usually? - don’t).  Otherwise why would romantic fiction be so popular?

What do you think is the most thrilling aspect of falling in love? Leave your answer here (and your email address) for the chance to win a PDF copy of one of my contemporary romance novels (your choice).

Then visit some of the other romance authors for more chances to win books and other goodies. Click here for the list.